The death was announced today of Edward 'Ted' David Williams following a long illness. He was 75 years old. 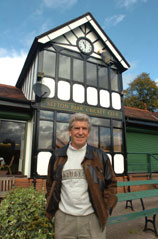 Born during the Second World War on 11th April 1945, Ted was educated at Liverpool College and excelled at cricket and hockey.

He joined Sefton Cricket Club, as it was then known, as a schoolboy and remained loyal to the club for the rest of his life.

Ted's last appearance in the 1st XI was on 16th September 2006, after which he played in the club's lower teams until 2018. In the evenings, he would be at Sefton coaching the club's 'next generation'.

A one club player, he was a member of the Sefton teams that won the Liverpool Competition in 1967. He was captain when they won it again in 1972 and led the team for a further three years.

He was also a member of the Liverpool Competition's representative XI that won the Steiner Cup in 1974, beating the Durham Senior League by 38 runs in the final at Aigburth, home of Sefton's arch rivals, Liverpool.

Ted represented Cheshire in the Minor Counties Championship in the 1960s but he hit the highlights in September 2010 when representing the county's over 60s in the final of the Spitfire National O60 Championship against Sussex at Letchworth. He took a hat trick in the final over to seize victory. This was the first of three consecutive victories in the Championship for the team.

A report at the time said:

"When Williams stepped up to bowl the final over at Letchworth CC, Sussex were in control at 215-7 in reply to Cheshire’s 219-9. The 65 year old's first ball was hammered for four to tie the scores but from the jaws of defeat Cheshire grabbed a dramatic victory.

"Once they hit the boundary everyone thought it was all over," said Runcorn based Williiams. "Even if they had blocked out the last five balls and the scores finished level they would have won having lost fewer wickets. Our only hope was bowling them out.

"My second ball was a dot, the third was lbw and my fourth was a long hop which was scooped straight to square leg.

"Then I reached into my distant past and managed to pull out of somewhere a delivery which pitched on middle and hit the top of off stump. The place erupted – we won a tied match having lost one fewer wicket.

"I've never known a finish to a game like that. My only other hat trick came in 1966 so you could say I was due one. I’ve got Sunday’s match ball and there are plans to get it mounted."

In 2016, Ted hit what he called his 'highest score on grass' when he scored 158 not out for Cheshire over 60 IIs against Somerset over 60s. His all time highest score of 170 not out was made on 'matting' for Menorca Cricket Club in 2003.

When he became eligible, Ted went on to play for Cheshire over 70s and in 2016 was selected for England over 70s.

Owing to his connection with Menorca CC, he was able to arrange trips to the island for the Northern Nomads Cricket Team of which he was a member on nine occasions from 1997.

During the winter months, he was involved in his other favourite sport, hockey, first as a player and then later in life as an umpire.

Ted held many positions at Sefton Park Cricket Club and was Chairman of the Liverpool Competition between 2006 and 2009 during which time he oversaw the ultimate expansion of the league from 24 to 36 in 2010.

He was admired and respected by old and young alike. Many a tale was told in the bar after matches where the visitors always had full glasses.

He was of a generation of which, sadly, few remain. Ted was one of the Liverpool Competition's gentlemen. To some, he was 'Lord Ted'.

Friends and colleagues extend their sincerest condolences to his wife Liz and their sons Mark, Paul and Ian and Sefton Park Cricket Club.

A brief appreciation from Johnny Bell, formerly of Marchwiel Hall:

Sorry to hear of the passing of Ted (E.D.) Williams. Ted was a regular at Cricket Week through the '70s and '80s, playing against us for The Northern Nomads. A fine all-rounder, Lord Ted was a stalwart of the Liverpool Competition playing for Sefton CC for many years. It was always a pleasure to play against Ted and he will be missed by many folks in the Liverpool area.