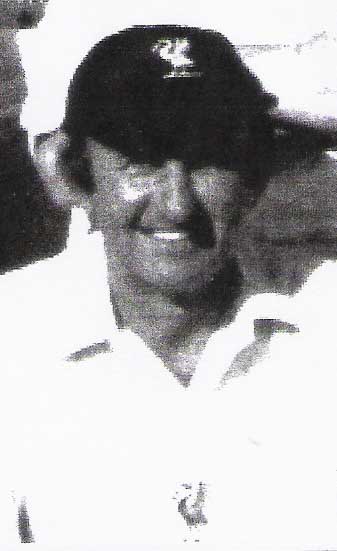 A thorough gentleman both on and off the field, Ray was one of the oldest surviving Liverpool Competition cricketers.

Ray was born into a cricketing family on 26th October 1922 in Oakham in the county of Rutland, his grandfather, Ralph Tyler, had played league cricket in Yorkshire, Lancashire and Staffordshire. He scored over 1000 runs in 1913 for Wigan CC where he was professional and coach.

Together with mother Lena and sister Janet, Ray moved to Liverpool in October 1935 after his father Bernard Tyler, who had been professional at Liverpool CC since 1928, was asked to become head groundsman following the retirement of JW Meads.

The family lived in the house on the corner of the ground which is still used by the club's groundsman to this day.

It was a natural progression for Ray to play cricket. He was twelve years old on arrival in Liverpool. Whilst at Heath Road School, he was fortunate to have Arthur Corrin in charge of cricket. The school won the 'Uncle Stalky' cup in 1937. This team included two boys who became top class professionals in their sports, Jim Large (golf) and Eddie Spicer (football).

At this time, to become a member of Liverpool CC, it was still 'Public School' only. Ray therefore could not join as he was, following Heath Road, being educated at Toxteth Technical Institute, followed by night school at the City of Liverpool Technical College.

However, Eddie Spicer and Ray were invited to bowl in the practice nets, helping the professional, who was ex Lancashire player, Ralph Whitehead. He helped Ray with his bowling at this time, as accurate bowling was required. Incidentally, Ralph Whitehead had a sensational début for Lancashire in 1908, when he scored 131 not out and was later no balled for throwing four times in one over.

One Saturday during the 1938 season, the second eleven were playing at home when the captain spoke to Bernard: "I am one short and want your lad to play". Ray enjoyed the game and remembers taking four wickets which pleased his parents and made him eager to become a good cricketer.

He was now serving an engineering apprenticeship with the Liverpool Corporation with a day release system to help him study to reach his target and become a member of the Institute of Mechanical Engineers.

1939 brought the outbreak of the Second World War. The Liverpool club membership was greatly reduced, many joining the armed forces, sadly, many never to return. Liverpool tried to keep one cricket team playing, with the ex Lancashire captain, JR Barnes in charge. This did not last long as the pavilion was taken over by the defence forces and a barrage balloon positioned on the main ground.

Bernard joined the Royal Air Force and was based at a number of air stations, including one at Stornaway in Scotland, In 1941.

Sefton CC were still playing cricket along with a few other clubs.

Ray was invited to join Sefton and learnt a lot playing in a very good team, captained by Mel Coomer. This was very enjoyable cricket in a time of great stress with regular German bombing raids on the city.

Ray volunteered for the RAF in 1942 and passed the necessary tests at Padgate, near Warrington, taking over two days to complete them. He was told "We will call you up for air crew very soon". What a shock when the 'call up' arrived. They instructed him to join the Royal Navy at Portsmouth. Ray found out later that it was because of his diesel engine experience. This meant the rest of the war was spent in 'Combined Operations' involved with assault landing craft and training with the Royal Marine Commandos.

After the Germans were on the run, Ray was shipped out to South East Asia Command. This involved some time spent in the docks at Bombay, still involved with landing craft. Being shore based, allowed some time for sport, including football for the Royal Navy in the West of India football league. Some of the Indian teams played without boots but they were not disadvantaged as their feet were 'bone hard'.

The cricket in Bombay was quite a high standard. Ray was fortunate to play with and against first class players from England and India. these included DCS Compton, BH Lyon, CH Palmer, RT Simpson, PF Judge and wicket keeper P Corrall, Vinoo Mankad and RV Divecha. Ray often talked about the twenty minutes coaching session he had with Company Sergeant Major DCS Compton. He enjoyed bowling his spinners and Ray was the lucky one to stay and bat with him in the nets.

Following the end of hostilities in 1945, Ray and father Bernard were demobbed. Bernard continued as head groundsman at Liverpool CC and Ray was allowed to become a playing member as the club rules had changed. Members were accepted following a successful interview.

Ray played cricket for the club's first eleven up to the early seventies. It was a great honour for him to be made captain of the club in 1959. He did four seasons in all as first eleven skipper and also captained the second and Sunday elevens. He continued to play in the third and fourth elevens on condition that he wasn't keeping a younger player out of the side.

In 1958, Ray scored more than 1000 first eleven Liverpool Competition runs, being the first post war Liverpool Cricket Club batsman to reach this target. It has only been achieved by one amateur player from the club since then and that was John Hitchmough in 1984.

Ray was fortunate to take over some great players in 1959. The team that year became champions, defeating the other fifteen clubs in successive matches, a record that will be hard to beat. The weather must have been kind. Ray has always said 'Bowlers win matches' and he had five in the top fifteen in the averages. TIF Tod was the leading batsman with 779 runs, average 78. Ray was next with 707 average 50.

Ray also captained the Liverpool Competition representative side and played for them many times. He had a number of offers to 'pro' in leagues, but he  remained loyal to Liverpool and the Liverpool Competition. The great Harry Makepeace, then Lancashire coach, made Ray a verbal offer of a one year contract on the Lancashire staff. He had to say "No" as he was studying engineering and he could not get a year off from his employer, Father Bernard offered advice, saying "They can't make a county cricketer in one year, ask for three years". Harry Makepeace said "Sorry, we can't do that."

Towards the end of his playing career, Ray played for the Lancashire '50 plus' XI in the county championship, In 1985, Lancashire won the final at the Essex county ground at Chelmsford and Ray was awarded the 'Man of the Series' for topping the batting averages. The presentation was made by FR Brown, the ex captain of England, whilst Bob Blair, the former New Zealand test bowler, was the Lancashire captain.

Ray was a regular player in Colwyn Bay's Cricket Festival during the 1950s.

Ray played for Liverpool Cricket Club until the age of 73 when he finally drew the curtains on his illustrious career after which he and his wife Gwen were regular spectators.

He will be forever remembered for the passionate speech he gave at the 2002 AGM at Sefton Park CC stating why he was better candidate for the post than his rival, Ray Digman.

The Liverpool club also honoured Ray by making him President and this was followed some years later by Ray's wife Gwen being made a Vice-President. This honour was awarded to Gwen for many years work as ambassador for the club. It was Gwen's second home and she made it her duty to welcome new members and always encouraged the young players. She also had a 'top ten' list of cricketers, good fun was created when the number one spot was in doubt. Gwen also donated the 'Gwen Tyler Shield' for the Young Cricketer of the Year.

Gwen was a great supporter of Ray and his cricket and career. Between them they produced two sons, Christopher and Philip. Christopher followed the cricket tradition, captaining the Holt School team and playing for the Liverpool club's junior side. His education took him to Bangor University and on completion there had just got into the Liverpool first eleven when a teaching appointment took him to Burton on Trent. He played for the Burton club, a very old, established club dating back to 1827.

Christopher became their Hon. Secretary and produced a book on the history of Burton cricket in 1977; a copy of which is in the Liverpool Club Library. Included are details of matches played between Liverpool CC and Burton CC as long ago as 1850. They played home and away and were two innings matches. Both sides had professional players. One wonders how they travelled - stage coach possibly? The players must have had at least four days off work when making such a long journey!

Ray's younger son, Philip, went into the jewellery business on leaving school. This involved working long hours, including all day Saturdays. Perhaps this is a reason he didn't take up the sport. His hobbies are collecting militaria and fast motor bikes. Philip's mother always worried when the motor bike roared off and was greatly relieved when it returned home.

Sadly in 2001, Gwen passed away in the Royal Liverpool Hospital after a long and painful illness which was eventually diagnosed as the 'big C'. Ray, the boys and her many friends were devastated. Ray took a long time to get over it as they were very close. More than two hundred people came to say goodbye to Gwen and she is remembered by a Red Rose in the garden in front of the Liverpool Cricket Club's pavilion.

Ray saw out his final years as a resident at Ranelagh House Residential Home on Aigburth Road, a cricket ball's throw away from his beloved Liverpool Cricket Club.

Ray is survived by his sons Christopher and Philip, to whom friends and colleagues extend their sincerest condolences.